Sayeeda has volunteered all her life. From local community work, regional and national campaigns, through to international initiatives. She has helped to satrt, establish, and fund-raise a wide range of charities. She served on the Joseph Rowntree charitable trust, was a member of the Dewsbury Rotary Club, and helped establish the conservative party’s domestic and international social action projects. Describing social action as “doing your bit, or mucking in” as they say in Yorkshire, Sayeeda Warsi served as shadow minster for social action. During her three years as Shadow Minister for Social Action Sayeeda helped to make Social Action part of the Conservative Party’s DNA.

Sayeeda established the Savayra Foundation UK (SFUK) in 2002, for which she is currently the

trustee. For over 2 decades, SFUK supported over 10000 destitute women and their families in Pakistan and Kashmir. They have over this time moved from traditional aid work to financial empowerment. Following the 2010 floods in Pakistan, the Savayra Foundation rebuilt a village in the flood stricken area of Khyber Pakhtunkhwa. SFUK is currently building a purpose-built women’s centre in rural Pakistan. Click here to find out more.

In 2008 Sayeeda led The Welsh House Farm Community Transformation project  in Quinton, Birmingham. The social action team worked with the Welsh House Farm residents to support their efforts to better their community. The Haven centre which is the hub of the youth work that takes place on the estate had a makeover and the Multi Use Games Area, or MUGA as the  residents call it, also benefited from some TLC.

These projects amongst others laid the foundation for the Conservative Party’s deep rooted commitment to the big society.

In 2009 Sayeeda and 32 parliamentarians, candidates, and senior volunteers worked together with the inspirational charity “Fund for Refugees” both in Srebrenica and Sarajevo. This trip, dubbed Project Maja, became the basis of the program Remembering Srebrenicia, which was founded and established by Sayeeda in Government in 2012.

In 2011, Sayeeda lead parliamentary colleagues and senior volunteers as part of the Conservative Party’s international social action project, Project Maja. Project Maja went to Bangladesh, a country with which the United Kingdom has deep historical, social and economic ties. Over the space of seven days the team, consisting of MPs, an MEP, activists and volunteers conducted education, sports, renovation and health projects. 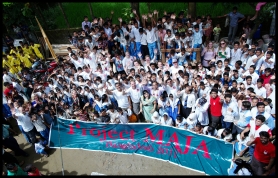 In 2015, Sayeeda established the Baroness Warsi foundation, a charity aimed at creating more inclusive communities. The foundation works to improve social mobility, by providing opportunities and support for those who are disadvantaged by race, class, gender, or faith. The foundation has worked with the Social Mobility Foundation to help disadvantaged

students access the UK’s top universities, and has created an employability workshop – called “Unwritten Rules” – focused on giving 16 to 18 years old the skills to succeed. The foundation also aims to strengthen the voices of women across the UK, and to help increase the amount of resources and opportunities available to them.

Learn more about the foundation here.