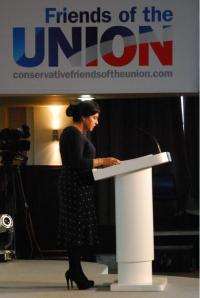 As Tory Chairman I spend a lot of my time taking on unions – namely the ones that fund Labour’s campaigns.

But today I want to come out and defend a Union.

One which has benefitted us all for centuries.

One which is key to our success as a nation.

And one which we must work flat-out to keep intact:

The Union between Scotland, Wales, England and Northern Ireland.

That is why I wholeheartedly support the launch of the Conservative Friends of the Union group.

Which couldn’t have a better champion than the dynamic, enthusiastic, vibrant and hugely patriotic Ruth Davidson.

Now we’ve all heard – and will continue to hear – the reasons why we should preserve our Union.

But as someone who is referred to as the campaigning chairman…

…who goes up and down the country every week to argue our case, fight for our cause….

…I want to explain exactly how I believe we can prevent the breakup of the Union.

Some people say this is a debate about one man who is determined to break up the Union: Alex Salmond.

One correspondent wrote to me at CCHQ about his fears about a referendum.

He said: Be wary of Alex Salmond ‘winding people up with the pipes and drums’.

But I have seen him banging the drum for division.

And it is our job to drown out this separatist rhetoric with a positive case for keeping the Union intact.

In doing this we should be inspired by last year’s No to AV campaign.

We started off by exposing how terrible the voting system was: complicated, expensive and pointless.

But that alone wouldn’t have won us the argument.

What really clinched it was when we demonstrated how powerful, how precious our existing system of ‘one person, one vote’ was.

As soon as we showed what was at stake, we were well away.

It became a positive campaign.

A ‘you don’t know what you’ve got till it’s gone’ campaign.

And a campaign which helped us see off AV by an massive margin.

So this campaign needs to not just be about Scotland being worse off without us.

Yes, the easier thing to do would be to pick holes in the alternative – and we certainly will.

But when you’re fighting for something so fundamental, the more mature, more difficult, more powerful thing to do is make a positive case.

I believe in a politics where people vote for something.

We must show people that in voting to save the Union, they are voting for stability, strength and prosperity.

That’s why we are launching the Enemies of Independence group but the Friends of the Union.

We also need to make clear that the Conservatives are fighting for unity in spite of the boost independence would give us.

Many have pointed out that lopping Scotland off the electoral map would guarantee us future majorities.

But Conference, we want what is right for our country.

It’s a bit like our mission to sort out the deficit – it’s   not popular, but it’s right for the UK.

And just as we won’t leave future generations with a mammoth debt.

We also cannot leave them with a collection of weakened nations – nations which once stood as a strong Union.

At the same time we cannot allow Alex Salmond to hijack patriotism.

He says that if you love Scotland, if you believe in its future, you must support independence.

But we need to make something clear: that a person’s loyalty to Scotland is not in question if they are also loyal to the United Kingdom.

I can vouch for this having spent my life – being English, British, northern and Muslim – proving that my loyalties are not divided.

And I have been able to do so because Britain is a place of diversity, of multiple identities.

A place where you can be a stoic Scot and a proud Brit.

And that is why patriotism does not equate to separatism.

This referendum, like AV, will be all about the communication of the case.

And how I like to explain the independence question is by likening it to a relationship.

If someone says ‘this isn’t working’ it’s natural to say ‘I don’t want you either’.

The rest of the Union could say the same to Scotland.

But, as with a relationship, if it’s worth fighting for then you show them what they mean to you.

It’s the same with Scotland’s place in the Union.

We need to show just what this relationship means to us.

Campaigning is in the DNA of the Conservative Party.

So too is our commitment to the Union.

We are, after all, the Conservative and Unionist Party.

So let’s get out there and show it.