Sayeeda Warsi: We stand side by side with the Pope in fighting for faith

Today I have the honour of leading the largest ministerial delegation from the United Kingdom to the Vatican – our reciprocal visit following the momentous State Visit of His Holiness Pope Benedict XVI in September 2010. 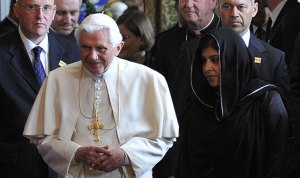 We will be celebrating the decision Margaret Thatcher took 30 years ago to restore full diplomatic relations between our countries. The relationship between the UK and the Holy See is our oldest diplomatic relationship, first established in 1479. And today, thanks to the great success of the Pope’s visit, it is one of the strongest too.

But this trip is about more than a Valentine’s Day “love in” with our Catholic neighbours. This is about recognising the deep and intrinsic role of faith here in Britain and overseas. For a number of years I have been saying that we need to have a better understanding of faith in our country. Why? Because I profoundly believe that faith has a vital and important role to play in modern society. But mistakenly, faith has been neglected, undermined – and yes, even attacked – by governments in recent years.

When I met the Holy Father in 2010 he told me that he had heard what I had been saying and urged me to carry on making my case robustly. So today, I am taking a renewed message to the Vatican City; one which I want to ring out beyond the Vatican walls.

I will be arguing that to create a more just society, people need to feel stronger in their religious identities and more confident in their creeds. In practice this means individuals not diluting their faiths and nations not denying their religious heritages.

This is a message I’ve delivered on these pages before. But today I will be taking the argument one step further. I will be arguing for Europe to become more confident and more comfortable in its Christianity. The point is this: the societies we live in, the cultures we have created, the values we hold and the things we fight for all stem from centuries of discussion, dissent and belief in Christianity.

These values shine through our politics, our public life, our culture, our economics, our language and our architecture. And, as I will say today, you cannot and should not extract these Christian foundations from the evolution of our nations any more than you can or should erase the spires from our landscapes.

My fear today is that a militant secularisation is taking hold of our societies. We see it in any number of things: when signs of religion cannot be displayed or worn in government buildings; when states won’t fund faith schools; and where religion is sidelined, marginalised and downgraded in the public sphere.

It seems astonishing to me that those who wrote the European Constitution made no mention of God or Christianity. When I denounced this tendency two days before the Holy Father’s State Visit in September 2010, saying that government should “do God”, I received countless messages of support. The overwhelming message was: “At last someone has said it”.

That so many people felt moved to write showed just how uneasy they were at the rising tide of secularism.

For me, one of the most worrying aspects about this militant secularisation is that at its core and in its instincts it is deeply intolerant. It demonstrates similar traits to totalitarian regimes – denying people the right to a religious identity because they were frightened of the concept of multiple identities.

That’s why in the 20th century, one of the first acts of totalitarian regimes was the targeting of organised religion.

Of course there is a crucial caveat to all of this. I am not calling for some kind of 21st century theocracy. Religious faith and its followers do not have the only answer. There will be times when politicians and faith leaders will disagree. What is more, secularism is not intrinsically damaging. My concern is when secularisation is pushed to an extreme, when it requires the complete removal of faith from the public sphere. So I am calling for a more open confidence in faith, where faith has a place at the table, though not an exclusive position.

When we look at the deep distrust between some communities today, there is no doubt that faith has a key role to play in bridging these divides. If people understand that accepting a person of another faith isn’t a threat to their own, they can unite in fighting bigotry and work together to create a more just world.

All the major religions ask their followers to stand up for their neighbours. Doing so doesn’t make you less of a Christian, less of a Jew, less of a Muslim – it makes you more of one.

So when I have my second audience with the Holy Father tomorrow afternoon, I will not just be looking back on his remarkable visit. I will be giving him my absolute commitment to continue fighting for faith in today’s society. I hope this is something we can share in and I hope it reinforces this extraordinary relationship between the UK and the Holy See.